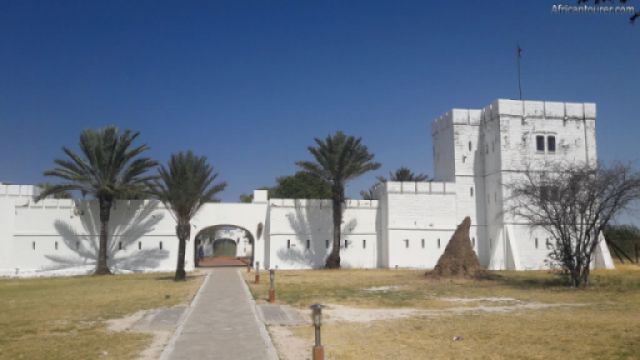 Fort Namutoni of Etosha national park, a view from the outside 1
It was built in the late 19th century as an outpost for the Schutztruppe, before being destroyed in 1904 during the Battle of Namutoni and rebuilt a year or two later.

Over the years, it has seen use as camp for World War I POW s, a police post and an Army base.

Today, it serves as a national monument, a restaurant, and view point for the nearby scenery and the King Nehale waterhole.

It also has a curio shop, an African craft shop and jewellery shop.

Nearby are a campsite, swimming pool, fuel station, and chalet rooms — all of which are part of Namutoni camp.

What to do thereGame viewing and sight seeing — the top offers amazing views of Namutoni camp, surrounding scenery and the King Nehale waterhole. A pair of binoculars may come in handy.

Also bird watching at the nearby salt pans, or just have a meal at the courtyard restaurant.

Best time to visitDuring winter and spring seasons, when rainfall is low and more animals can be seen at the nearby waterholes

This is also the high season.

Location of Fort namutoniFort Namutoni sits on the eastern end of Etosha national park, near both Fischer's and Etosha Salt Pans.

It also is on the western end of Namutoni camp, near the King Nehale waterhole.

How to get thereBy road or air.

The road from Von Lindequist gate is all tarmac — about a 10 minute drive, with the option of using a private, rental or tours vehicle.

There is an airstrip nearby and another near Von Lindequist gate.