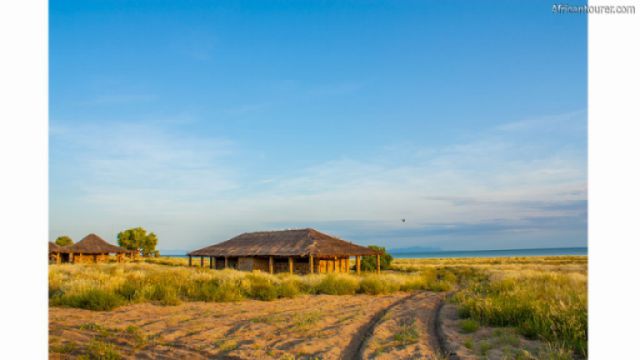 Koobi fora prehistoric site, museum buildings with lake Turkana in the background 1
Where a large number of archaeological findings were made, from both the pliocene and early pleistocene eras.

Its name means 'a place of the commiphora' in the local Gabbra language.

It is also the source of myrrh, a plant that is common in the area.

Over 200 hominid and animal skulls were found here, some of which are larger than that of similar species found today.

Among them are that of an elephant and tortoise, most of which have small buildings built around them.

It is said to have produced more hominid and animal skulls than what the rest of the world's fossil sites have produced in 60 years.

The site has a museum that showcases some of the artifacts.

What to do thereView the artifacts at the museum and explore the area for the sites where they were found.

Also possible are swimming in the lake, fishing, boating and hiking.

There are huts for accommodation.

Location of Koobi foraKoobi fora sits near the eastern shores of lake Turkana, less than 100 km south of the border between Kenya and Ethiopia.

This is a remote semi arid area inside Sibiloi national park.

How to get thereBy vehicle or boat.

The nearest airstrips are bit further out, though inside the same park.

Most commercial flights end at the Lodwar airport southwest of the lake, requiring a vehicle and boat ride to get here.

Or you could drive there, though you may need a good 4x4, plenty of fuel, supplies and maybe a support car — the more the better.

You could also get here by boat, with some available for hire at towns near the lake such as Kalokol.