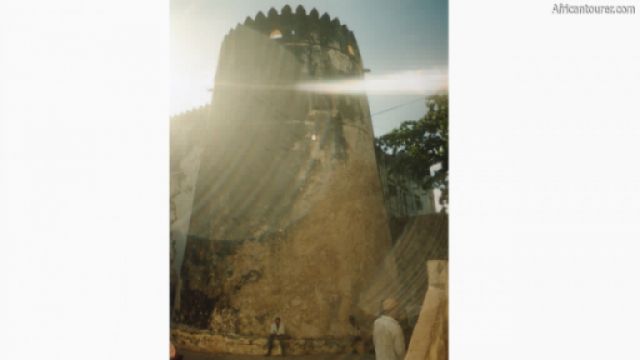 Lamu fort, one of its towers as seen from the outside1
A large, stone building in Old town — Lamu, that was built from 1813 to 1821 with the help of Omani Arabs, as a garrison for soldiers.

It is square in shape, with high walls on each side, and towers on each corner.

The increased security it offered contributed to the growth of the surrounding town.

It was used as a prison from 1910 to 1984 first by the British, then the Kenyan government, before being turned into a museum from 1984.

The lookouts at its top offers amazing views of Lamu and its coastline.

What to do thereLearn more about the history of Lamu, and the architecture of the time.

Location of Lamu fortLamu fort is on the island of Lamu, and in Lamu town — less than 100 metres from its shores.

It also is within walking distance of the main jetty, though closer to smaller ones.

The path to it uses streets so narrow that donkeys and walking are the main form of transportation.

How to get thereBy walking or boat.

The airport sits on an island opposite Lamu, requiring a ferry or boat ride to get here.

You also need to use a short ferry ride from Mokowe on the mainland, when coming here by road.

There are daily buses from Malindi and Mombasa, with some scenic views and wildlife to see along the way.