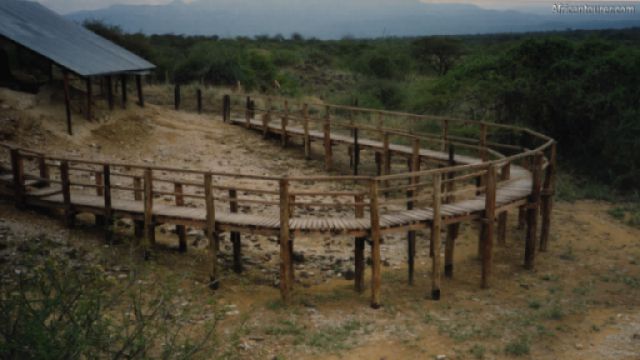 Olorgesailie prehistoric site, a walkway near one of the sites where findings were made 1
Where a large number of prehistoric stone tools were found, such as hand axes.

Most of these were in clusters, believed to represent encampments of prehistoric men.

It has well preserved artifacts, made possible by volcanic ash from nearby mountains that erupted in the past.

Another contributor is the site's position in an area believed to have been a lake basin in the past.

Fossilized skeletons of extinct species such elephants and hippopotamus were also found here, dating back to about 1 million years ago.

Today, there is a museum onsite that showcases some of the site's findings and hiplaces.story.

What to do thereVisit the museum, and the actual sites where the findings were made.

Visit the baboon camp, have picnics, barbecues and functions.

Or hike up mount Olorgesailie, which takes less than a day to the top and back — with a lot to see along the way.

There are campsites and bandas nearby for those who would like to stay longer, in which case water, food and other supplies may be necessary.

Best time to visitThe drier times of the year, usually, July to October and January to early March.

Location of OlorgesailieOlorgesailie is in southern Kenya — along the road to lake Magadi.

It also is near mt. Olorgesailie and on the floor of the eastern rift valley.

How to get thereBy vehicle, about an hour's drive outside Nairobi.

The nearest airport is in Nairobi.