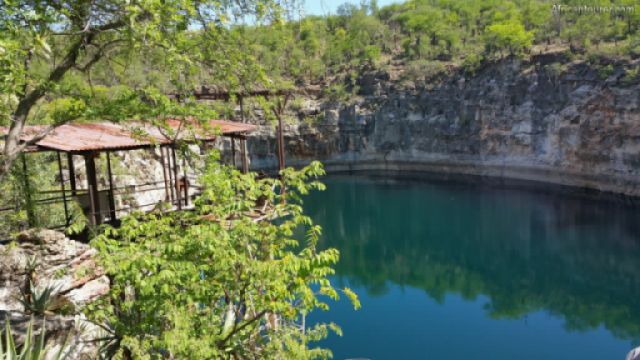 lake Guinas near Tsumeb, a view from the side 1
The larger of only two permanent natural lakes in namibia, formed after a collapsed Karst cave filled with rain water.

It is elliptical in shape, with width 59 m, length 120 m and a depth exceeding 130 m at its centre — where it is said to be connected to an underground cave system.

Like lake Otjikoto, its sides are almost vertical and its width increases with depth — much like an inverted mushroom.

Its levels vary with season — increasing during the rains, and is home to a unique species of tilapia.

Said to be connected to lake Otjikoto via an underground cave system, though there has been no evidence to prove this.

What to do thereSight seeing, swimming, diving for those with both the skill and bravery.

May need permission from the farm's owner.

Location of Lake Guinas In northern Namibia — on a private farm some 50 km west of Tsumeb.

How to get thereBy road, with the nearest airports and train station being at Tsumeb.