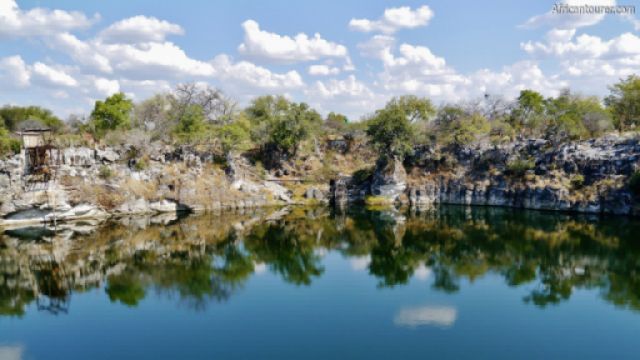 lake Otjikoto near Tsumeb, a view from the sides 1
The smaller of only two permanent natural lakes in namibia, formed after the collapse of a Karst cave.

Its name comes from the Herero word for 'deep hole' and no exploration to date has been able to find its bottom.

The deepest recorded depth exceeds 140 m, though the lake is said to have a cave system underneath.

It is almost circular in shape, with a diameter of about 104 m and its sides are so steep that a rope ladder is necessary to get in or out — especially when water levels fall.

As you dive deeper, its diameter increases making it possible to swim underneath the rocky crater rim.

In 1915 — during world war I, the lake was a dumping ground for German weaponry, before surrendering to advancing British soldiers. Some of these were recovered and can be seen at Tsumeb museum nearby.

Those that remained have been well preserved due to lack of oxygen and the depth of the lake, and can be seen by divers with both a permit and the skill required to reach such depths.

Also said to be in the lake is a safe with six million gold marks, though it has not been seen to date.

Nearby are facilities such as a toilet and shop.

What to do thereSight seeing, picnics, hiking and technical diving.

Location of lake OtjikotoIn northern Namibia — just a few km northwest of Tsumeb and next to the Tsumeb - Ondangwa highway.

How to get thereBy vehicle.

The nearest airport and train station are in Tsumeb.