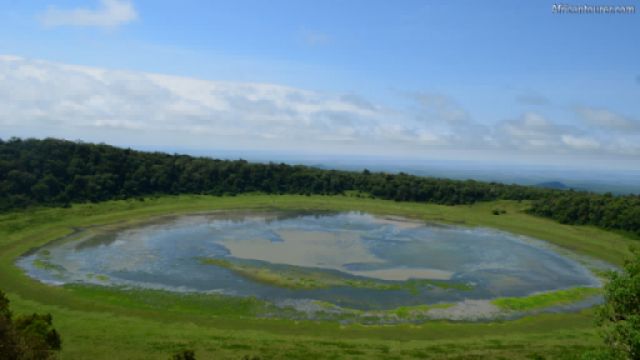 It is inside 'Gof Sokorte Guda', which is said to be a local Boran word for 'Big sweet water crater'2.

It was dubbed 'paradise' by american adventurers Martin and Osa Johnson.

Not far from here is a smaller but similar lake, inside 'Gof Sokorte Dika' or 'Small sweet water crater' — a popular hangout for elephants.

Together, the two are some of the best places to spot animals, as the rest of the park is covered in dense forest.

The area around it highly affected by climate, being a lush green during the rains and golden during the drier times.

What to do thereCamping, hiking, game viewing, bird watching, picnics, game drives — 4x4 territory as it is wet for most of the year.

Animals you may see here include elephants — some of whom are large tusked, buffalo, giraffe, rhinos, Grevy's zebra, and a large number of water birds.

A KWS ranger's escort may be required for some of the activities such as camping and hiking.

Location of lake ParadiseLake paradise is at the heart of Marsabit national park, and on the slopes of mount Marsabit.

It also is in northern Kenya, about a 10 km drive from the park's Ahmed gate and the town of Marsabit.

How to get thereBy vehicle or hiking, from the nearest Karare gate or Ahmed gate in the north.

There are no airstrips in the park, though one could be found in the town of Marsabit.

Hiking is also possible, though needs an armed ranger's escort as well as pre-arranging with the park beforehand.