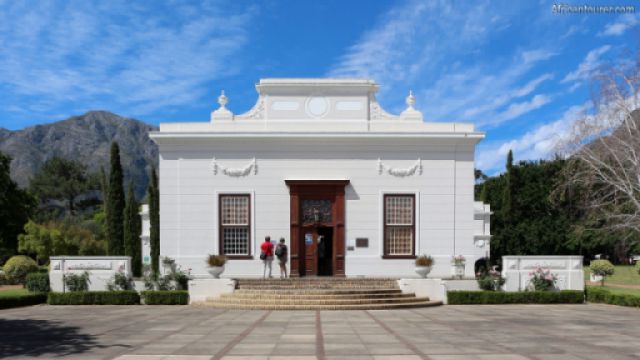 Huguenot Monument Memorial museum of Franschoek, a view of the Saasveld house 1
A museum in Franschoek about the Huguenots — a religious group from France that were persecuted by Roman catholics and the French monarchy for centuries, causing some to flee to other countries including the Cape colony, inside what is South Africa today.

It is housed in a complex of 4 buildings amidst sprawling gardens, one of which was the Saasveld house of Kloof street, Cape Town — residence of a Dutch East India Company employee named William Ferdinand van Reede, but was later dismantled and rebuilt at its current site by the Huguenot society.

Inside it are displays and artifacts on the history of the French Huguenots, including their persecution in France, their journey to the Cape colony, possible descendants and where they settled.

Outside is a memorial dedicated to the Huguenots — a woman standing on a globe, a broken chain in one hand and a bible in the other in the other — said to signify their freedom

Behind her is a structure with three arches — said to signify the holy trinity, and a large pond in front adding to the picturesque scenery.

What to do thereExplore the museum, see and know more about the Huguenots, go wine tasting, take the wine trams, visit wine estates, picnics.

Or visit other attractions in Franschoek.

Best time to visitDuring spring and summer or August to February every year.

Location of Huguenot Monument Memorial museumOn the southern and older end of Franschoek — near the old cemetery.

How to get thereBy bus or vehicle.

The nearest train station is in Paarl — some 33km away, with trains to and from Cape Town, where there is a large airport.