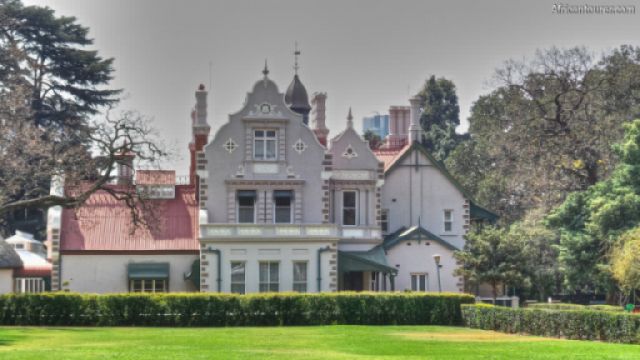 Melrose House museum of Pretoria as seen from gardens nearby 1
A large 3-storey mansion in Pretoria that used to be the residence of George Jesse Heys — a famous Pretoria businessman.

It was built in 1886 and named after the Melrose Abbey of Scotland where Heys and his wife visited on their honeymoon.

Since then it remained under ownership of the Heys family until 1968 — when it was bought and turned into a museum by the city, with some renovations being done later on in 1992.

Today, it is a museum with much of the original decor, furniture and items used by the Heys family.

Between 1900 and 1902 it was used as a HQ for the British war effort during the Boer war, that ended with the treaty of Vereeniging — signed in one of the house's rooms, which can be seen today.

Once a year, a fair is held on its grounds where one can buy or sell antique items.

What to do thereExplore the museum, sight seeing — Victorian and Edwardian era homes and lifestyle of the Heys family.

Or see where the Vereeniging treaty was signed and attend the annual antiques fair.

Location of Melrose house museumIn a tranquil neighbourhood of Pretoria's CBD — next to Burger's park.

There is a train station nearby and an airport within the city's limits.