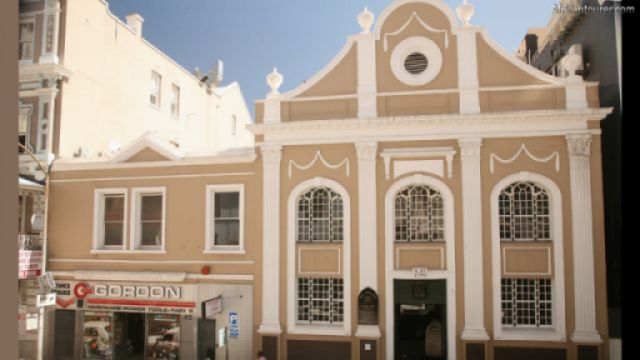 South African Sendinggestig museum of Cape Town as seen from Long st. 1
The oldest mission building in South Africa and the third oldest church, built from 1799 to 1804 by the Dutch Reformed Church with the help of locals.

Sendinggestig means 'missionary' in Afrikaans and the building is known for its unique architecture, like the steeply pitched roof — said to be the only one in the country.

From the outside, it looks less like a church, with a narrow but detailed facade facing out onto the street.

The interior however, is much more spacious with a high roof and two rows of seating — one stacked on top of the other like a theatre's dress circle.

It was used as a church until 1969 when Apartheid's group areas act forced a move to Belhar, selling the building to a business that wanted to demolish it.

However, intervention from the province saved the building — then in a state of disrepair, prompting renovations before it opened as a museum in 1979.

Today, it houses much of the original furniture, restored decors, paintings as well as displays on the history of the building, the missionaries and congregation — most of whom were slaves or freed slaves.

What to do thereExplore the museum and its unique architecture or learn more about the history of the mission and its congregation.

There is both a regional and local - train and bus station nearby, as well as an airport within the city's limits.