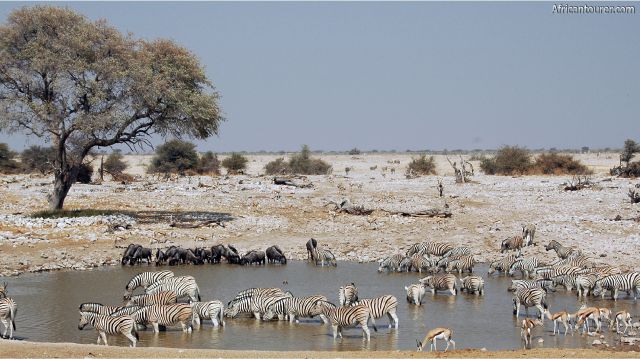 One of Namibia's larger and more popular national parks and home of the Etosha salt pan.

It has an area of about 22270 square kilometers2 and gets its name from the Oshindonga word for 'great white place'.

The landscape varies from desert, to Savannah and mopane woodlands.

There are a number of salt pans inside it, but Etosha is the largest, and most roads and viewing points are near its southern and eastern edge.

The rainy seasons see the salt pans partially fill up with water, which quickly disappears once it stops raining.

In years with severe rainfall, the pans turn into a shallow lake about 1cm deep.

Each camp, resort or lodge has its own waterhole, making it possible to see wildlife from the comfort of your room, tent or restaurant.

Best time to visitAny time of the year depending on what you want to see. The rainy seasons see fewer animal sightings as they move further from the waterholes, though the pans fill up with water.

The drier months are considered high seasons whereas the rainy seasons are low budget.

Location of Etosha national park It sits in northern Namibia, spread out over the Oshana, Oshikoto and Omusati regions. Almost all of the Etosha salt pan lies within it, as well as several other smaller ones.

Accommodation types include camping, lodges and resorts, both in and around the park.

How to get thereEtosha national park is reachable via a number of airstrips both inside and nearby. It also can be reached by road, a five hour drive north of Windhoek.

For those driving there, there are fuel stations inside the park, though it might be good to have a full tank as the distances are large.

Most of the roads inside are gravel, and can be used in all seasons.

There are a number of companies that offer self drive tour packages, air safaris, overland tours and group tours.

There are public buses to the area, though you would need a vehicle to roam the park.

Day
HH:mm
Zone
Related places We have no related things to show you

Other restaurants in this country
Distances shown are radial or 'as the crow flies' distances and not actual road journey lengths.