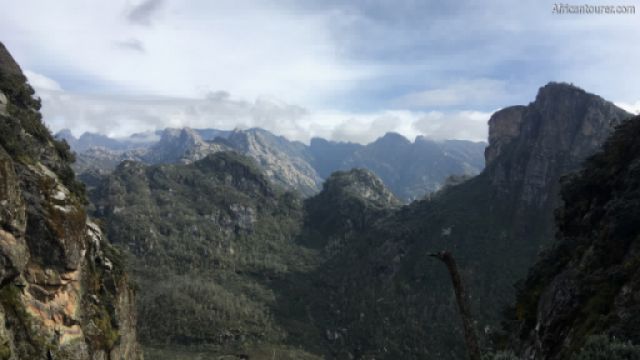 Rwenzori mountains national park, some of its many craggy peaks 1
Home to mount Stanley — Africa's third highest after mount Kilimanjaro and mount Kenya, with its name said to mean 'the rain maker' or 'mountain of rain' in one of the local language.

It covers an area of about 1000 square kilometres and is one of the sources for the river Nile.

These are block mountains formed millions of years ago.

The landscapeAt its centre are a number of craggy snow capped peaks, spread over six mountains — with some of these supporting receding glaciers.

As you move outwards to the lower altitudes, this changes to a barren landscape filled with lakes, then a moorland and finally a rainforest at the edge of the park.

Animals to seeForest elephant, duiker, hyrax, chimpanzee, black-and-white colobus monkey, L'Hoest's monkey and a number of bird species such as the Rwenzori turaco.

Best time to visitThe warmer and drier months of July to September and December to February.

Longer treks may require the use of a guide, porter, as well as special equipment such as that for trekking on ice.

It also is on the eastern end of the Albertine rift and within Africa's great lakes zone.

How to get thereBy air or road