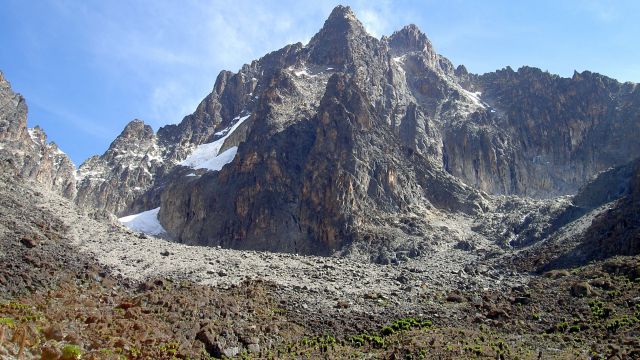 Batian peak of mount Kenya, (centre) with Nelion on its right and point Slade in front of it. A view from the south west [1]
Altitude: 5199 m.a.m.s.l.

Unlike point Lenana, Batian is not a frequented peak mainly due to the level of difficulty required to climb it. Most of the way there from the base of the mountain involves normal trekking, with the exception of the final part that involves some fifth class professional rock climbing.

There are ropes along the climbing routes, as well as resting or even camping points. Tour guides are not needed if you can prove that you have some technical climbing experience before attempting to summit this peak; However, lone climbers are also not allowed.

There are several rock climbing routes to the summit, such as the popular north face route, the ice route and even a climb from Nelion in the south east - with the climbing season being anytime not in the rainy season (march to june).

Just like most peaks on the mountain, the summit has a Kenyan flag - hung around a rock; However, the last time we checked there was no signpost mainly due to the difficulty of carrying one up there or anchoring it.

Batian is said to be the top of a volcanic plug, with some theories claiming that the actual peak may have been over 6000 metres high, only to have been eroded over the years by glaciation and weathering [1].

Location of Batian peakBatian is located at the centre of mount Kenya national park and just a few kilometres south of the equator, although still high enough to receive snowfall throughout the year - one of the wonders of the mountain. The actual equator passes through the northern foothills of the mountain.

There is no vegetation or animals in this area, with the exception of a few insects that you may only see if you really are looking for them. This is the nival zone of the mountain and the summit itself has no flat ground - just a pile of volcanic rocks that only get smaller as you go higher until finally no wider than your own height.

Weather on the mountain can range from calm and sunny to a cold snow storm, with climbing times being restricted to daytime as it can get very cold during the night. It is a common scenario to have people turn back before getting to the peak due to harsh weather conditions or sickness.

It also must be noted that weather on mountains can be very unpredictable, with storm warnings giving you only a few hours heads up. So we recommend caution - stay safe and use an experienced tour guide.