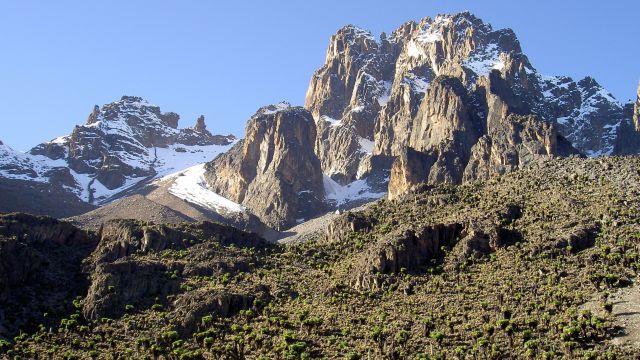 Nelion peak of mount Kenya , (leftmost on the right tower) with Batian to its right and point Thompson on the left (separate) [1]
Altitude: 5188 m.a.m.s.l.

Nelion is the second highest peak of mount Kenya after Batian and the two are located close to each other, albeit separated by the gate of mist. Just like Batian, it is one of the lesser frequented peaks due to the high level of difficulty required to climb it, usually fourth class professional rock climbing.

Unlike Batian, the area around the summit is large enough to hold a small metallic hut - called the Howell's hut. Built by mountaineer Ian Howell, this is normally used as a resting point for climbers before heading to Batian or descending. Some use it overnight, whereas some use it for a few hours.

The base of Nelion can be reached through any of the climbing routes of the mountain, from here, the preferred rock climbing route is on the south eastern face - the side closest to point Lenana. For this reason it is possible to do both point Lenana and Nelion at the same time.

Location of Nelion peakNelion is located at the centre of mount Kenya, amidst its many peaks and less than 1 kilometre south east of Batian - as the crow flies. It also is less than ten kilometres south of the equator that passes somewhere in the mountain's northern foothills; Yet still high enough to receive snowfall throughout the year along with a near constant fog on it and the nearby gate of mists.

There is no vegetation or animals at this peak, although you might see some on your way rock climbing up here - just small patches growing from cracks in the rocks.

From here, you can either head to Batian, or descend to the base of the rock tower. The climb to Batian would normally take you into the gate of mists - a short descent followed by another rock climb to the summit. Climbers headed to Batian, normally spend at least one night at Howell's hut, one while climbing to Batian and an optional one while descending.