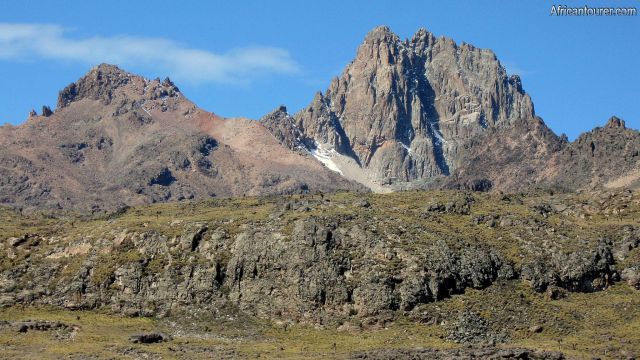 Point Lenana mount Kenya, on the left with Nelion and Batian on the right (same peak)
Altitude: 4985 m.a.m.s.l.

Point Lenana is one of several peaks of mount Kenya, as well as the highest that can be climbed by trekking alone. To climb any higher than this would require professional rock climbing skills, something that makes this the most frequented peak of the mountain.

It is the third highest peak of the mountain, with the actual summit of the mountain being Batian at 5199 m.a.m.s.l. The name 'Lenana' commemorates one of the sons of a legendary Maasai Laibon [2].

Almost all climbing routes have access to point Lenana and it is normally reached anywhere from before dawn to the early hours on the morning of day three of the climb. There is a signpost onsite denoting the actual point - atop a pile of large volcanic rocks (ridge) along with a pole sporting a small flag of Kenya with the word 'Munyao' - surname of Kisoi Munyao who raised the flag at this point when Kenya got its independence in 1963.

From here you can have amazing views of the other peaks Batian and Nelion, standing across what is a large valley - between two ridges with Nelion (5188 m.a.m.s.l.) being the closest to point Lenana.

Location of Point lenana peakPoint Lenana is located at the heart of mount Kenya and slightly to the east of the actual summit - Batian. Most of the other peaks are actually located within a horizontal (as the crow flies) distance of 1km although actual walking distances are usually much larger and normally require lengthy trekking or rock climbing.

There is absolutely no vegetation in this area or animals, only a few tough critters that may only be seen if you really are looking for them. Snowfall or frozen ice from moisture in the previous night is not an uncommon sight as this is one of the coldest and most windy areas of the mountain.