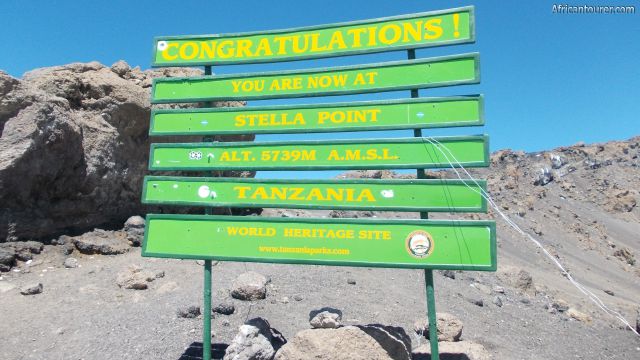 A point on the crater rim of mount Kilimanjaro that marks the end of the scree filled slopes of Kibo, while using the ascent route from Barafu hut.

For climbers from Barafu hut, this would be the first point after the campsite where there is solid, non sloping ground that is also free of loose gravel.

There is a huge sign post onsite, courtesy of the park authorities (TANAPA), that marks its location to approaching people.

Some choose to end their climb here due to fatigue or altitude sickness, though the climb to the summit from here is fairly easy, compared to that from Barafu hut.

For those who end at Stella point, the park authorities do offer recognition certificates for reaching this point, Gilman's point or Uhuru peak.

Stella point is also where the trails from Gilman's point, Uhuru peak and Barafu hut meet and most people attempting to summit the mountain would go through Stella point.

The only route that does not go through it is the perilous Western breach, that requires special permission.

What to do thereHiking, trekking, photos — on the way to or from the summit.

Best time to visitThe warmer months of the year, usually July to February.

Location of Stella point tourist siteStella point is located on the southern crater rim of Kibo — the tallest of Kilimanjaro's three peaks.

This is the arctic zone of the mountain, a region with no rainfall, high winds and sub zero temperature.

It also is at the end of the toughest part of the route — the scree filled slopes of Kibo and start of a ridge that leads up to the summit.

Most of Kilimanjaro's glaciers and the crater can be seen from this point, and if you get to this point or the peak before dawn, there are spectacular views of Mawenzi, the sun rising in the horizon, the glaciers and the vast slopes down below from where you came.

On most mornings, the ground would be covered with ice, formed from moisture that condensed during the night.

However, an even rarer scenario would be snow covering most of the rocks around the area.

There are absolutely no plants, animals or insects here except for one or two species of really tough spiders.

How to get thereBy hiking