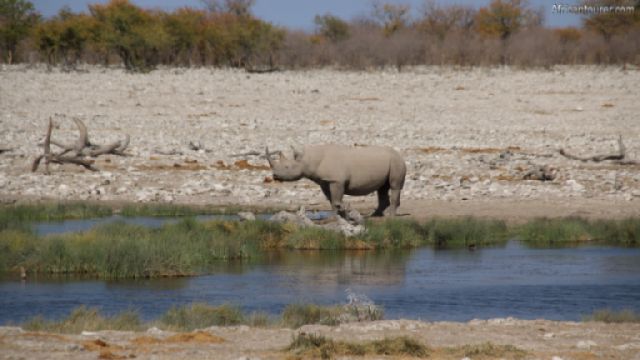 Rietfontein waterhole of Etosha National Park, a black rhinoceros near it 1
One of Etosha national park's natural waterholes, fed by an artesian fountain, with a small reed-filled island at its centre.

It's name means 'Reed fountain' — a name given by the Dorstland trekkers, due to the reeds that grow around it.

Also in the same area are the ruins of a bone meal processing plant used to cull Zebra and Wildebeest, before public outcry forced its closure in 1980 2.

It is one of the park's larger waterholes, and a good spot to see lions.

What to do thereGame drives and game viewing

Best time to visitDuring the dry seasons of May to October, when it is one of few water sources in the park.

Location of Rietfontein waterholeIt sits at the centre of a large clearing on the eastern end of Etosha national park.

Nearby is the road northeast from Okaukuejo camp, that follows the southern periphery of the Etosha Salt Pan.

How to get thereBy road — via a short drive from Halali camp, or a longer one from one of the park's gates.