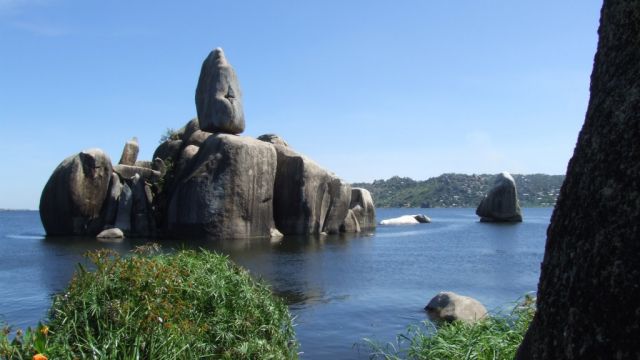 Bismarck rock Mwanza, view from the shore near Kamanga ferry harbour [2]
The Bismarck rock is a precariously balanced rock that is located in lake Victoria and the city of Mwanza. It is also a point where a statue of the late German Chancellor Otto von Bismarck was said to be erected, thus taking his name. The statue was later on pulled down into the water nearby, when the British took over from the Germans after world war one - but the name stuck. Since then, the rock has become a famous icon of the city, featuring in many photos for both locals and tourists.

The Bismarck rock sits above water and on a set of larger rocks in a collective formation that rises more than 10 metres above the lake's surface. The surrounding areas are also quite attractive, with a few restaurants nearby, a well maintained small public park with green lawn and a ferry harbour to the other side of Mwanza gulf.

Formation of the rocksLike most of the rocks in the area, whole set of rocks are made from granite that formed in the earth's crust millions of years ago and later on pushed to the surface by tectonic forces and folding of the crust. At this time, the rock's were just blocks with sharp edges covered with loose earth and visible from the outside as a hill. Continued weathering removed the loose material around it, exposing the blocks to the elements, with chemical weathering giving them their final rounded shape. The whole process took millions of years to complete [1].

What to do at the rock?The rock is a famous spot for photos, but there are many things to do afterwards, including roaming the nearby park and streets or having a meal at nearby restaurants. It is not far from the shore but the area's water's are known to hold a few crocodiles, so swimming the waters around it is out of the question (at your own risk). The park nearby can also be used as a picnic spot.

Another possible activity in the area would be to take the ferry, that goes to Kamanga from the harbour nearby and make sure you get a good seat as its path takes you halfway around the rock giving you about a 180 view, the rest of which you could view from the shore. The ferry would also give you an added tour of the city and the great lake Victoria.

For an even closer view, you can rent a boat nearby for a 360 degree view of the rock and even climb or explore its base rocks (bottom part). Most of the these have steep sides, making a complete climb to the top almost impossible; However, if you do manage to get to the top, just be careful with the rock itself as although it is said to be stable, you'll never actually know to what extent. Plus I wouldn't want to be the one to push the famous icon into the water. If you really are keen on climbing, then there is a rock on the shore nearby and next to the park that is more stable.

Location of Bismarck rockThe Bismarck rock is located near Kamanga ferry of the city of Mwanza, just a few metres from the rocky shore of lake Victoria and surrounded by the hustle and bustle of the urban city. You could find almost anything nearby, from shops and hotels to stadiums (Nyamagana) and restaurants. The rock also lies within the Mwanza gulf, close to the harbour of the city where you can get marine transport to different parts of the lake.

Also nearby is the Mwaloni fish market where you can sample some freshly caught fish from the lake or buy raw ones to cook later. For more information on its location please see the map below (click to start).

Getting thereThe rock is easily from any point in the city of Mwanza, just get into any taxi and head to Kamanga ferry. Any local would be able to point in you in it's direction and you could actually walk to the area if your hotel is in the urban area. The other method would be to use public transport - small minibuses that usually have a coloured horizontal stripe just below the windows and running its whole length. Again here ask for direction at your hotel or from the locals, but generally taxi's in the area are usually pretty cheap.