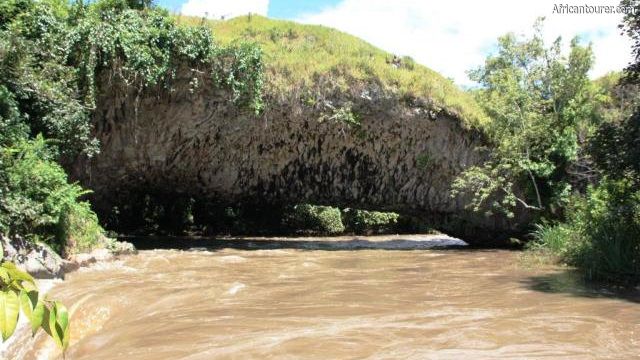 It has a width slightly larger than that of a single lane bridge and a length of about 50 metres.

Despite not being engineered to do so, the bridge can withstand large loads such as herds of cattle crossing.

It is believed that the bridge was formed millions of years ago when water flowed through cooling lava that spewed from the nearby mt. Rungwe, creating a path underneath what became a hard rock structure.

Since then, the bridge has withstood the tests of nature and time to a level that is better than any man made bridge, most of which have a reliable life span of a century or less.

The name 'Daraja la mungu' was coined by locals due to its Godly like design along with other traditional beliefs and stories.

Since its recognition as a popular tourist site, there has been another bridge bridge constructed about a hundred metres north west of it, mainly to assist the old bridge on a job it has done since long before the dawn of civilization.

Best time to visitAny time not during the rainy season of March to June every year.

Location of Daraja la mungu (gods bridge)Daraja la mungu sits among the two banks of the ferocious Kiwira river that flows all the way into Lake Nyasa.

This is a highland area, filled with greenery, high rainfall, foggy mornings and cold nights.

Temperatures in this and nearby areas have been known to drop below zero.

It also is in Rungwe district of Mbeya region — Tanzania

Just nearby and about 300 metres upstream is a small town.

How to get thereBy vehicle or hiking.

Luckily, the roads to it are all tarmac, mainly due to the town nearby that would otherwise be unreachable.

There are passenger buses that ply the route from Mbeya city to Tukuyu and Kyela.

However, this is quite a distance from though here and you would need other transportation means.

This could be motorcycle taxis or other minubuses if you are lucky.