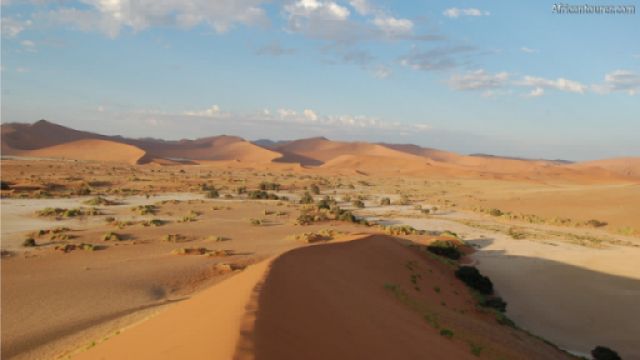 Its name means 'dead end marsh', referring to its position at the end of the Tsauchab river. 'Vlei' is Afrikaans for marsh and 'sossus' means 'dead end' in one of the local languages.

The name is sometimes used for the whole area, that includes other pans such as Dead vlei, Hidden Vlei, Nara Vlei and several red sand some of which are the world's tallest.

Unlike the other pans in the area, Sossusvlei still has some green a number of thorny bushes and camel thorn trees, fed by the waters of the seasonal Tsauchab river.

During seasons with heavy rainfall, it sometimes fills with water, turning into a shallow pool that may attract some birds. In dry seasons, the ground turns white and hard.

Best time to visitEarly mornings of any day of the year, for the best views and hikes during cooler temperatures.

Location of Sossusvlei At the heart of Namib Naukluft national park, and the end of the Tsauchab surrounded by red sand dunes.

How to get thereBy road, about a 5 hour drive from the country's capital Windhoek.

Vehicles park some distance from the area, with the last bit being covered on foot.

Vehicle options include self drive tours, bus tours and it is also part of the Rovos train tour.