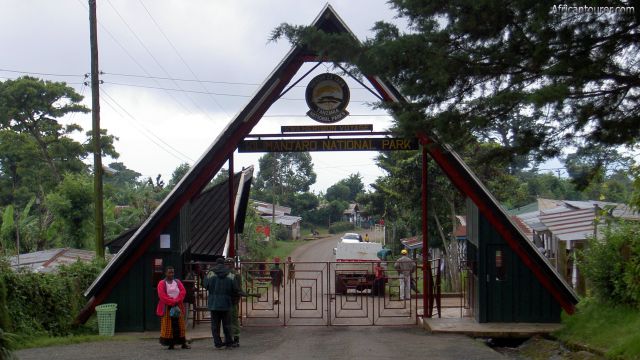 Marangu gate. of Kilimanjaro national park, view from the inside of the main entrance gate to the park offices compound. [1]
Altitude: 1970 m.a.m.s.l.

An entry point into mount Kilimanjaro as well as the start of the Marangu hiking trail of the mountain.

It also serves as an exit point or the end of the Marangu and Rongai hiking trails.

As the Marangu route is the most popular on the mountain, the gate and its compound is also the largest of any in the national park, boasting shops, souvenir shops, small restaurants and some tour and travel offices.

Marangu gate also has the largest number of offices belonging to the park authorities (TANAPA) and is where all tourists going into or out of the park are supposed to register.

This is also where most would meet their guides and porters before finally heading into the park, and if you have less equipment, there usually are some shops around the area where you may find a limited range for hire or sale.

There also is a large, secure car park onsite for those who would like to head to the gate in their own cars.

The gate also serves as an entry point for vehicles going into the park, heading to the first campsite — Mandara huts. You should be able to see a dirt road running along side the trail. The road culminates at the first campsite and is normally used to ferry park supplies as well as evacuate people in case of emergencies but not for tourists.

Other features near the gate include a waterfall with a plunge pool that is located along the trail, less than 30 minutes away that may provide a relaxing swim on the way down.

Location of Marangu gateMarangu gate lies in the south-eastern foothills of Mt. Kilimanjaro and in the suburb of Marangu.

Unlike other gates into the park, the area around it has a lot of houses, shops, small restaurants and even hotels, although it may still be described as being rural.

However, the route to the gate is scenic and takes you through rural Kilimanjaro, using tarmac roads that are always free of traffic jams.

Like all the gates into the national park, Marangu gate is located at the edge of the montane forest, with the village around it having fewer trees.

Despite this, the area makes up for this with its cleanliness and tranquility.

It does receive a lot of rainfall, but the winds are almost always gentle breezes carrying the sounds of the occasional monkeys or birds chattering.